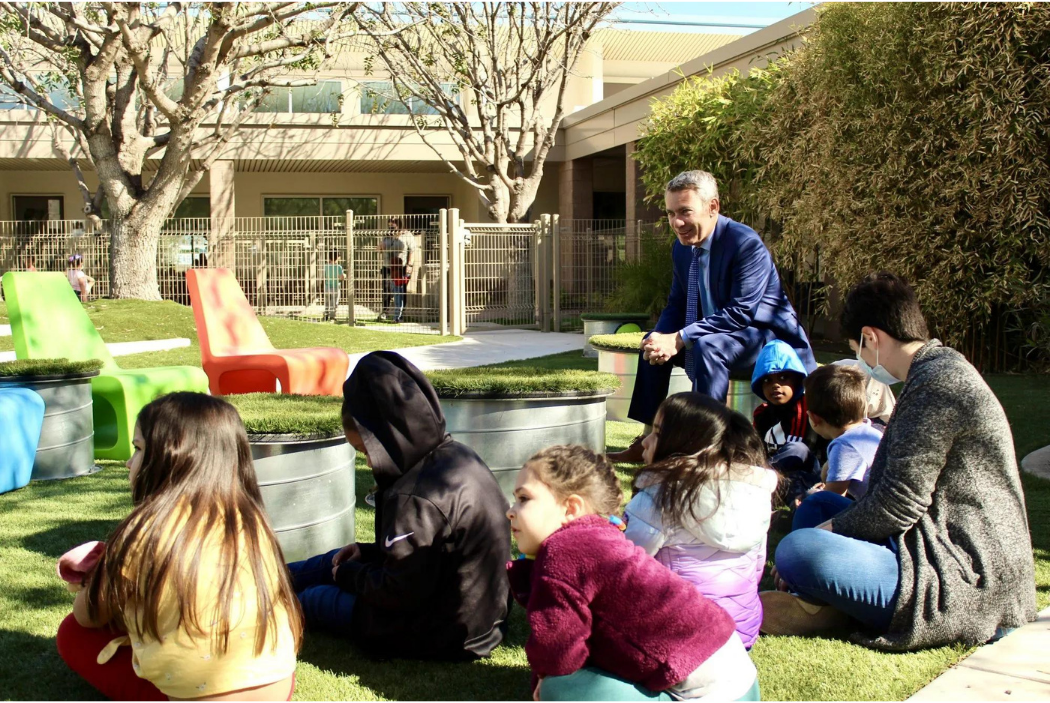 Only 17 percent of Arizona’s three and four years old’s are in any pre-school program in the Grand Canyon State.

Of that 17 percent, only about 30 percent are in a high-quality program that meets State and Federal Head Start Guidelines. Arizona meets just 3 out of the 10 NIEER (National Institute for Early Education Research) benchmarks.

Parents that enroll their children in pre-school and pre-k programs pay an average of $7,000.00 in tuition.

Arizona is one of only six states that do not provide any state-funded Pre-K program for four year olds.

While touring an Educare School in Phoenix (a facility on 48th street funded by both public and private dollars with a student body whose families make $19,000 or lower,) Mr. Lieberman described his four-year plan to increase child enrollment (to families that want it) in high quality Pre-K from 15,000 to 60,000.

Please see the video of the event by clicking below.

After being introduced by Pedro Ramirez, a foster father of a child who has made great strides while at Educare, Mr. Lieberman said that “a high quality pre k is one of the most powerful tools children can have to succeed better in life.”

Commenting on Arizonan leaders (mostly Republican) refusal (and moving backwards) to invest in Universal Pre-K and only 30 percent of preschools being labeled high quality, the former Legislative District 28 State Representative said “That is wrong and it must stop.”

Lieberman then pointed out all the socio-economic benefits to his proposed Universal Pre-K program including:

Moving forward on his program, Mr. Lieberman said his goal was to expand Pre-K membership from 15,000 in his first year as Governor to 60,000 in his fourth.

He also said that through partnerships with universities and community college teaching programs, the transition to Universal High Quality Pre-K will be smoother.

In terms of costs, Mr. Lieberman estimates the first year of the program will cost $100 million and about $450 million by the fourth. He would pay for it by tapping into the State Budget surplus.

He closed by stating his plan is the “largest investment in early childhood education,” that “we cannot afford not to make investments in this area,” and “We can have it all in Arizona. Let’s make this the best state in the country to raise a family by providing Pre-K for every single four year old.”

When asked by a reporter by the Associated Press on the problems with the teacher shortage in Arizona and if the long-term funding is sustainable, Mr. Lieberman pointed to his plan to raise teacher pay and how that will help solve the teacher shortage. He also said that funding should be ample if voters reject the Republican tax cuts.

Later when asked by Blog for Arizona about how he would raise the level of high-quality schools from 30 percent, Mr. Lieberman again said that the funding increases will help improve overall quality along with accountability monitoring of existing pre-school facilities.